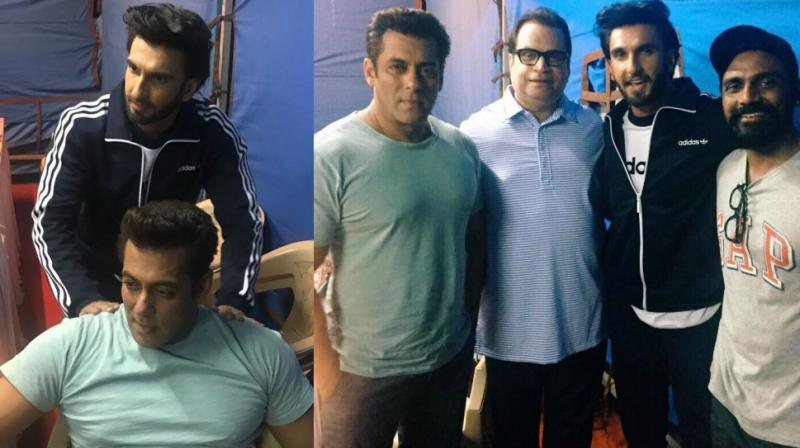 Ranveer Singh is a fireball of energy who can entertain you like there’s no tomorrow. On the other hand, Salman Khan’s energy levels are also amazing as also his timing. Both appeared together twice – during ‘Bigg Boss 9’ in 2015 and ‘Bigg Boss 10’ last year – during the release of Bajirao Mastani and Befikre respectively. This year too, Ranveer Singh has a release – Padmavati – but sadly, he didn’t visit the sets of the reality show that’s hosted by Salman Khan.

However, not all is lost for those wanting to see them together for the third time. Yesterday, Ranveer Singh visited the sets of Salman’s upcoming film Race 3. Both had a lovely interaction it seems, as evident from the pictures that are out. However, a picture uploaded by the official account of Tips today is something you shouldn’t miss at any cost. It features Salman Khan sitting down and Ranveer Singh sitting on a height behind him. Ranveer can be seen massaging Salman on his shoulder and making him feel relaxed. The tagline says, “Ek actor hi dusre actor ka stress samaj sakta hai”. Salman seems lost in thoughts and so is Ranveer. Ranveer Singh in fact looks quite demure in this picture, which is quite contrary to his image.

On the film front, Ranveer Singh’s next film is the period film Padmavati, in which he will be seen in a menacing role of Alauddin Khilji. It is directed by Sanjay Leela Bhansali and is expected to release this year. Salman Khan’s next is Tiger Zinda Hai, the sequel to his 2012 blockbuster Ek Tha Tiger. It releases on December 22. Race 3 meanwhile will release on Eid and is directed by Remo D’Souza.