Xiaomi Mi Band 4 price in India: Xiaomi has finally launched its much awaited fitness band – Mi Band 4 at Smarter Living 2020 event in Bengaluru on Tuesday. The Chinese electronics maker claimed Mi Band 4 as a next-generation Mi Band that offers eveything a fitness enthusiast would want. The Mi Band 4 is an affordable fitness tracking band that was earlier launched in China at 169 Yuan. While in India, it is priced at Rs 2,299 and offers a full-colour 0.95-inch OLED display, NFC and voice-aided controls.

Raghu Reddy, Head Online Sales, Xiaomi said that the company is number one smart wearable gadget brand in India, Mi Band 3 received great response. “Reviewers and customers both appreciated the product. We have shipped more than 1.5 million fitness bands till date and Mi Band 4 is the latest one in squad,” he said.

The Mi Band 4 sports a 0.95-inch AMOLED display panel that tells detailed information about user’s physical activity and notifications of text messages and voice calls directly. The display serves other purposes like QR codes scanning also. This latest fitness bracelet has a built in microphone for voice assistance, which enables the user to interact with the smart band via touch as well as voice commands. The biggest higlight of the band is that it offers unlimited watch faces that can be selected by the users from the app, including their own images. 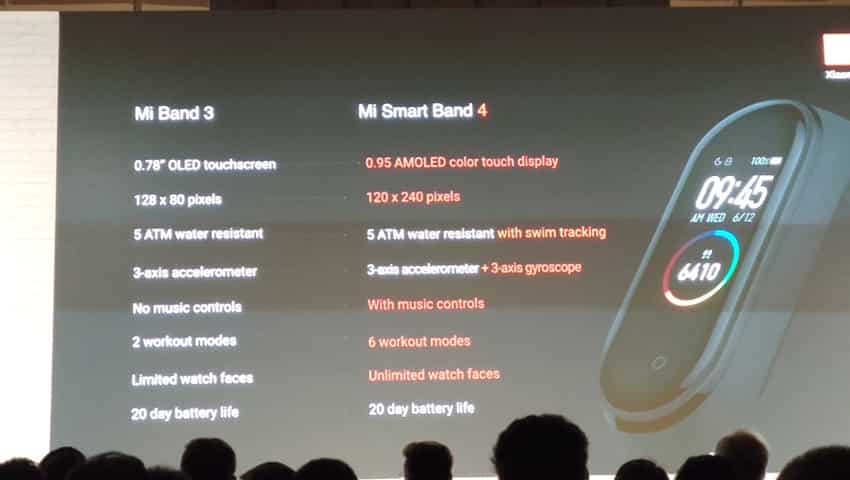 The Mi Band 4 sports a six-axis accelerometer and can even identify various swimming strokes and offer swolf scores, a user especially beneficial for swimmers. The Mi Band 4 is smarter than the Mi Band 3 as it comes with various tracking and fitness features. The Mi Band 4 can easily detect different swimming activities like Freestyle, Backstroke, Butterfly stroke, and Medley.

Xiaomi at its Smarter Living 2020 event also launched its biggest, 65 inch Mi TV in India and a water purifier.